LDAP Search has the option to save queries as favorites so they can be used again, to save a favorite, setup the query as required, then enter the name and click on the Save button

Previously saved favorites can be displayed by clicking on the drop down list at the end of the favorite field. Favorites are saved in the NetTools.ini file using standard ini formatting.  Here is a example of a saved favorite called 'Active Users':

More examples of the others favorites can be found here

By default if the field value is not defined in the ini, as in filename above, the field is not changed when the favorite is selected and current value is preserved.

The variable can be entered in the corresponding field before the favorite is saved or by editing the NetTools.ini after the favorite has been saved. The variable are set when the Populate button is pressed (See LDAP Search Populate), and then by selecting the saved favorite the variable will be replaced with the relevant details.

NetTools also supports the option to share your favorite using the import and export functions, at the end of the favorites field there is three button, to save, export and import a favorite to and from the clipboard.  When the Import button is press the following dialog is displayed and the favorite text can be pasted into the dialog and added.  The imported favorite will be saved based on the name in the the square bracket, if the favorite already exists it will be overwritten. 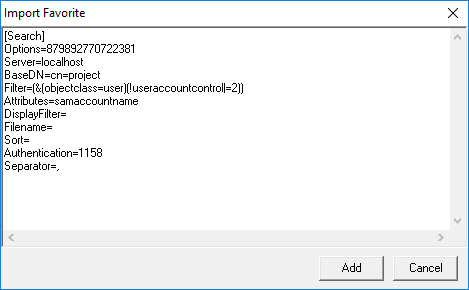 LDAP Search also support context based favorites, these favorites are not listed in the favorite dropdown list, they are displayed under the Custom menu item on the context menu for the text pane.  With Context Favorites, it is possible to pass the select text in the text output pane to the favorite.

To create a Context Favorite, the name used to save the Favorite must start with ##sel i.e. ##selGet Details.  The favorite will be displayed as Get Details under the Custom on the context menu 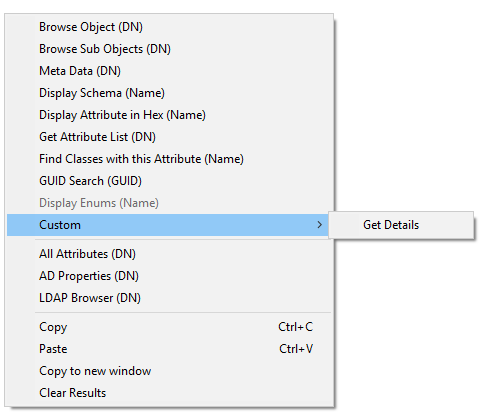 The selected text from the Text view pane can be passed to the query by using the ##sel as a substitution for any field in the favorite.

In this example the selected text is expected to be the samaccountname, and the favorite will search and the details of the object.  To prompt what details should be in the selected text, add this to the Favorite name as in the example.