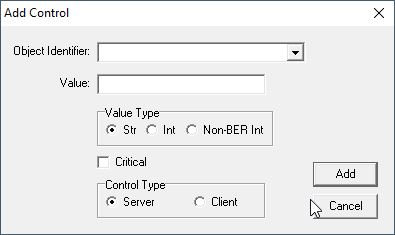 You can either manually enter the OID of the control you which to include or you can use the dropdown list to select the common controls are that available in Active Directory.  The Value field is used to define the value that is passed with the control, the Value Type defines the encoding that is used for the value, Str or Integer BER Encoded value, or Non-BER encoded Integer.  The critical option is used to define if the control is critical to the operation of the query, if a control is marked as Critical and server doesn't support that control, then the LDAP query will fail with Error: (0x0C) The control is critical and the server does not support the control.

Currently only server side controls are supported, the support for client side controls could be introduced in later versions of NetTools.

The controls added in this dialog are in additional to the server side controls that are selected on the LDAP Search page.